In looking around online to see what other versions of Penuche call for, I’ve found that it or something very similar to it has a million names – Tablet in Scotland, Sucre à la Crème in Quebec, Russian Fudge in New Zealand and Australia, Panoche in Hawaii and the Southern USA – but the recipe that was shown to me, scribbled on a piece of paper, called it Penuche. Every year on Christmas Eve, for as long as I can remember, we’ve gone to my Aunt Wendy’s house for dinner.  When I was a kid, it was a madhouse – a million kids and adults, overhead, underfoot, out on the lake playing shinny. Dinner was massive, and delicious, and a noisy riot. Later it was smaller, just adults, quieter and mostly my mom & aunt’s side of the family.

After dinner we would bundle in the car and drive up the road to Nana and Papa’s, where there was always tea, and we’d open the presents from them and our other aunts and uncles.  On the way home, we’d honk as we exited the driveway and drove down Frank Hill Road into the crisp night, Nana waving from her kitchen door. One of us would point to the sky and say ‘Do you see Santa?’ while others would claim to hear sleigh bells.

Nana died in 2012, and my Aunt’s health has declined, which meant a lot of changes to the Christmas Eve tradition; when you get older, you always have to adjust. You have to make your own traditions to replace the ones that can’t continue. This recipe, for a brown sugar fudge that a friend of my aunt’s would give her as a gift every year, came to me scribbled on a piece of paper that I took a quick photo of a few years ago.  Until this year, I’d never tried to make it, but I recently realized that if I didn’t make it myself, I might never have it again. It took two attempts – candy is not my forte – but the second time I got it to work. If you follow the instructions below, you should find it works too – the initial instructions I was working with were a bit vague.

This recipe is part of my Shaw Family Christmas Recipes series; you can find the rest of our annual cooking and baking traditions there. 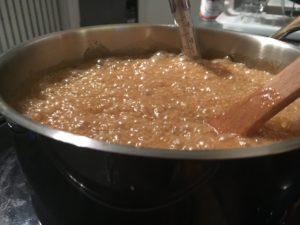 : this is a point in candy-making where, when you’ve heated the mixture to the appropriate temperature, a drop of the mixture dropped into cold water will form a soft ball. If you don’t have a candy thermometer, you can use this to judge whether or not your fudge is at the correct temperature. But really, candy thermometers aren’t expensive and they’re more accurate, so it’s worthwhile to buy one if you can.