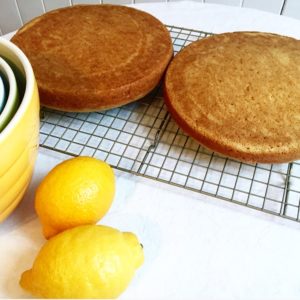 I’m generally pretty suspicious of vegan baking – I’ve tried a few nearly-inedible vegan sweets in the past that really turned me off. But there are a lot of great bakers out there who’ve found ways to make really wonderful vegan treats, and in looking through their recipes I found that there’s a pretty consistent formula – somehow the vinegar does the trick. This lemon cake is tasty and moist, and honestly you wouldn’t know it was vegan by taste or texture.

I baked this cake last week for my sister Sammi’s birthday – she and my other sister, Cassie, were doing Vegan February, so my usual go-to birthday treats, like cheesecake, were out.  Even my mom liked the cake, but reactions were mixed re: the icing – my coconut oil has a strong coconut flavour, which some like and others don’t.  Depending on what you use, you’ll have varying flavours, and it really depends on how much you like the flavour of coconut!