I like camping, and being out in the woods; it’s energizing to be surrounded by trees and water and far away from city life (which I also love, but need a break from sometimes).  When I was a kid, we used to go to Silent Lake Provincial Park to camp as a family, and we all love it there – particularly because the lake is closed to motorized vehicles, and it’s really peaceful with just canoes and kayaks exploring the lake. This year, my mom finally organized us into renting one of Silent Lake’s yurts for a few nights, and we headed up in early July.

There are lots of attitudes about what counts as ‘camping,’ and I’ve heard them all; amongst properly outdoorsy people, there are lots of snide comments about the difference between ‘car camping’ and ‘real camping,’ and a yurt with bunk beds and a barbeque doesn’t count as ‘camping’ in their books.  I think these people are deeply insecure no-fun-nics, so I guess we’re all judgemental people. 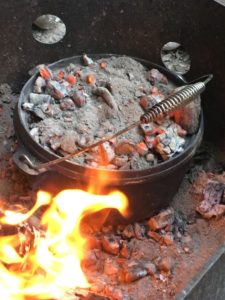 For me, one of the nice things about car camping is that you can bring things that are non-essential but fun, like my Dutch Oven.  I bought it years ago, and it’s been collecting dust in my mom’s back room for ages.  I’d been meaning to try out recipes, but it was never convenient to take, so it sat neglected.  Until this Summer, when I finally got the chance to use it at Silent Lake!

Baking bread in a campfire with a Dutch Oven is almost as easy as making it at home, and because we planned on baking it on our first night, I mixed and kneaded the bread at my mom’s house just before we left.  If that wasn’t an option, I would’ve pre-measured the ingredients so that it was easy to put it all together at camp.

That gave it a good long rise, which I recommend; that afternoon, at the yurt, I punched it down, lined the Dutch oven with parchment paper, and left it to the second rise until about 10pm, when the coals for the fire were at the right stage – when our Nana would have said that the coals were ‘perfect for toast.’

Though some people advocate removing the coals from the fire pit and placing them and the Dutch Oven in a separate tray, I found it was pretty much fine in the fire pit itself; I did leave it an extra five minutes (35 minutes was too long!), which allowed it to burn a bit on the bottom and one side, but I’m proud of it as my first-ever Dutch Oven baking experiment.  Recipe below! 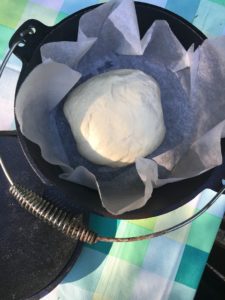