When you elect people who think they can run a city or a country “like a business,”you get to see what happens when the normally-hidden stupidities, inefficiencies, and mistakes of the corporate world are applied to the public realm. 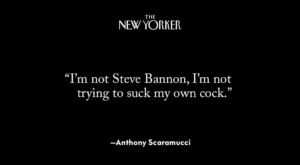 When men who’ve lived their lives fuelled by luck and privilege and connections, who think their success is due to their own awesomeness, skill, and perspicacity, enter public service, they fall to pieces.
Used to speaking candidly to ‘inferiors’ who are too afraid to repeat their words in public, or peers who think it’s all very manly and shoot-from-the-hip, they blab every stupid thought that enters their silly heads. To reporters. On Twitter. On the record.
Unused to accountability for their actions, they behave like there are no consequences.
Never really scrutinized beyond their facade of bluff machismo, under examination they turn out to be small-minded, short-sighted, and under-informed.

You can call it ‘strategy’ or ‘3D chess’ if you like (please don’t, though, because that sounds pretty stupid), but the truth is that these guys have no plan. They’re flailing. They aren’t strategically creating a distraction from anything, though they may be trying to distract from their own weakness.

They aren’t good at governing, and chances are, they weren’t good at running companies either. They have staff for that, people who prop them up and make them look smart. And though politicians have staff to do a lot, so much more rides on the personal competence and intelligence and ability of the elected official themselves. Ford, as mayor, had no idea what he was doing, even though he’d been a Councillor for years. The guys in the White House right now don’t even have Ford’s scant knowledge of how public office works.

What I am is despairing that, despite all of this obvious and repeated evidence of business-world incompetency, the ‘I’ve run businesses, so I can run governments better than public servants!’ campaign pitch is going to continue to work long after we’re all dead and buried, should humanity manage to survive the coming catastrophes we’re bringing down upon ourselves.