This year has been weird; sometimes extremely bad and hard, but still not a bad year, overall.

Endings and some beginnings

I feel like 2017 has been a series of endings, personally.  My boss of several years left, and that changed the shape of my job in more ways than I can count; it’s almost like having a new job in a very familiar setting. It was stressful, at first, but there have been some good changes, too.

I moved out of the apartment I’d shared with Tim Walker since 2013, and into another apartment in the same building with my new roommate, Robin Leblanc (aka The Thirsty Wench).  It’s so nice to be on the side of the building that gets some natural light!

The Superintendent of our building, Andrew Kinsmen, went missing in June, and there’s still no trace of him – a number of LGBTQ folks have gone missing from the Village, and there’s a lot of speculation about what’s going on.  His absence is felt daily, in little things around the building. It’s scary and disturbing.

Shelter Valley Folk Festival, which I’ve been a volunteer with for 14 years, held its last festival this past Labour Day weekend, and then voted to close out the organization altogether at a meeting last week.  SVFF has been a huge part of my life, and is absolutely why I landed in the career that I did. Though it’s a good and smart decision, it still hurts to know that this beautiful thing we built together – listed by CBC as one of Canada’s Top Ten Festivals –  has come to an end.

My sweet little black kitty, Zephy, died this Autumn at 18 after some illnesses this year.  She was my good friend and companion, my little buddy, my grouchy snuggler, and not a day goes by that I don’t miss her.  She was with me for most of my adult life, through some very tough years and some good ones, and she was the best cat in the whole world.

Some other changes have happened that are more private, and though they’re difficult, they’re overall moving in a good direction.

Some of these changes have been good, or necessary; some have been sad and hard. I’m trying to look at this as a year of transition, of capping off the last two decades and moving into the next phase of my life.

It’s harder for me to see the good things, because so much of the year has been tied up in loss, frustration, sadness, and all of that. But that being said, it wasn’t a bad year for me, though it had many bad moments.

Sammi and Hodge got married! It was a great weekend with perfect weather, beautiful venues, and everything running on time or ahead of schedule.  We’ve found that working together was a real pleasure – we were organized, efficient, and communicated really well.  Now we’re looking for more projects that we can work on together, because the wedding went so well.

The last Shelter Valley Folk Festival was a beauty – perfect weather, a terrific lineup, and most of the people from the community that I love and whom I didn’t know fifteen years ago.  A really fitting end to something that was always so lovely and jewel-like, and that really helped me to see a world and a dream beyond what I was used to in my hometown. Seeing children grow up and take on adult responsibilities, seeing couples come together, new babies born, people taking on responsibilities beyond what they thought they could handle and flourishing – it’s all been incredible, inspiring, and joyous. Even the end, proving that sometimes you can choose a graceful exit, even in a situation that’s fraught and emotional. We’ll close out the organization with no debts, with good sense, and with calm, and that’s very important to me. 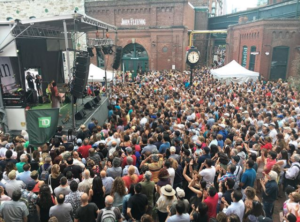 This year at The Distillery District was probably one of our busiest ever for events, even though the Summer weather was a bit soggy.  We hosted over 40 artists and bands at the Music City Summer Series, many film, tv, and commercial photo shoots, including the feature film Little Italy, a great program of regular annual events, the brand-new Toronto Light Festival (170,000 visitors!) and the 8th annual Toronto Christmas Market (final numbers aren’t in yet, but I know it was over 600,000 visitors). There were a lot of changes, but overall it’s been really good, and I’ve enjoyed my work.

For the past three or four years, I’ve had some stressful health issues that have made my life more difficult and robbed me of my energy and ability; I’ve been making good progress on all fronts, figuring out how best to live in this body and care for it. Thanks to a small army of physiotherapists (Eleanor, Rachelle, and Sarah), I’ve found answers to issues and pain I’ve been living with, in some cases for as long as twenty years. It’s wonderful to know that, while everybody is going to have physical pain, especially as they get older, there are ways to reduce it or work with your body to reduce the amount of time you suffer it.  It’s extremely hopeful to know that there are actual solutions. I feel physically better than I have in years. 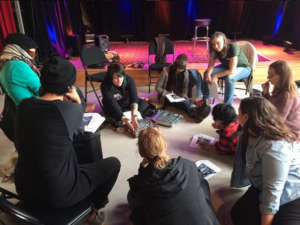 This year, too, Canadian Women Working in Music ran workshops across Ontario (Thank you to the OAC for the funding!), teaching women the basics of live sound.  Nothing is as heartening as sitting in one of those rooms as women – some of whom have been working in music since they were teenagers – finally get their hands on the soundboard in a setting that’s respectful and inclusive, and seeing their faces light up as they learn. It reminds me that the work of Feminism can be as much about happiness, joy, and excitement as anything.  We also released two Festival report cards this year – one for 2016, one for 2017 – and the responses have been mostly really good.  One unexpected thing has been festivals writing in to ask us for updates, because our count was based off of an incomplete lineup, or gratitude, and a very lovely thing has been watching festivals share their good marks with pride.

Some other good things include doing a month of daily yoga last January with Yoga With Adrienne, appearing as a guest on the podcast Erik Roberts is the Fucking Man (episode #44), hosting the United Nations Room at the Folk Alliance International conference in Kansas City, emceeing at Hillside Festival in Guelph, and attending the inspiring Folk Music Ontario conference this past Autumn. I didn’t travel much, but I did spend a weekend with my sisters at the RAW Retreat at Cedar Ridge Camp, where we went swimming, kayaking, canoeing, horseback riding, and did archery and a high ropes course and just generally had a very relaxed, fun time (our version of a Bachelorette Party for my sister Sammi). I also quilted and canned and cooked.  Oh, and I turned 40, and some wildly lovely friends played a show for my birthday and we all had a really good time.

Near the end of the year, aiming to keep myself motivated through the months of the Christmas Market (which I always find a bit difficult, because it’s a long festival and the schedule means it’s very hard for me to get out and see friends), I started a weekly recipe project – Shaw Family Christmas Recipes – which I’ve enjoyed so much that I may keep it up in the new year.

I have some small goals, mostly.

Keep working on my health and learning about what I need to do to support my body –  Physio, food, exercise, and things that support my mental health are all a focus. 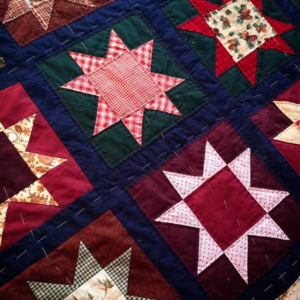 Finish my quilt – I was hoping to have finished the hand-quilting by the end of this year, but Zephy’s death kind-of knocked the stuffing out of me.  She had been my constant, purring companion for all of the progress on it in 2017, so it was hard to pick it up again without her cuddling underneath it.
This one is pretty close to being finished, after ten years of very-occasional work on it, and it will be nice to have it done.

Keep on cooking and photographing – though I didn’t really have any intention beyond keeping myself motivated through a tough season, making, photographing, and posting weekly recipes has been really fun and satisfying.  I’ve got enough draft recipes to get through about 30 weeks, I just need to make them and take some good photos.  And that’s the fun, creative part, so I think I might keep on with it. I also just got a set of photography lights and backdrops, so I’d better get some use out of them!

Run 5km – I’ve come close in the past two years, but gotten sick or busy and then gotten derailed.  I’m not sure I exactly like running, but it is a free activity that I can do whenever, wherever, without joining a gym or getting special equipment.  And I sure like the feeling of having gone for a run.  I want 2018 to be the year that I run 5km for the first time ever.

Take more time for myself – When I first moved to Toronto, I had so much free time outside of work that I felt like I was on vacation. I went to galleries and museums, I took workshops and explored neighbourhoods. I want to get back to that this year, now that I’ve got a better handle on my health and energy.

Have hope, be joyful – There are always good things.  The work I do is good, my friends are great, and my life is sweet and lovely.  Remembering to focus on that is important, to remember the good and sweet things that happen and not to get bogged down in the sad things.

Lots of good things happened in 2017 – once I start listing them, it seems like a lot, though it’s hard to remember in light of the other things.

Here’s to a new year that’s light and easy, filled with good friends, good food, and fun, for me and for all of you.

Wishing you all a healthy and prosperous 2018, wherever you are.
Athbhliain faoi mhaise daoibh!